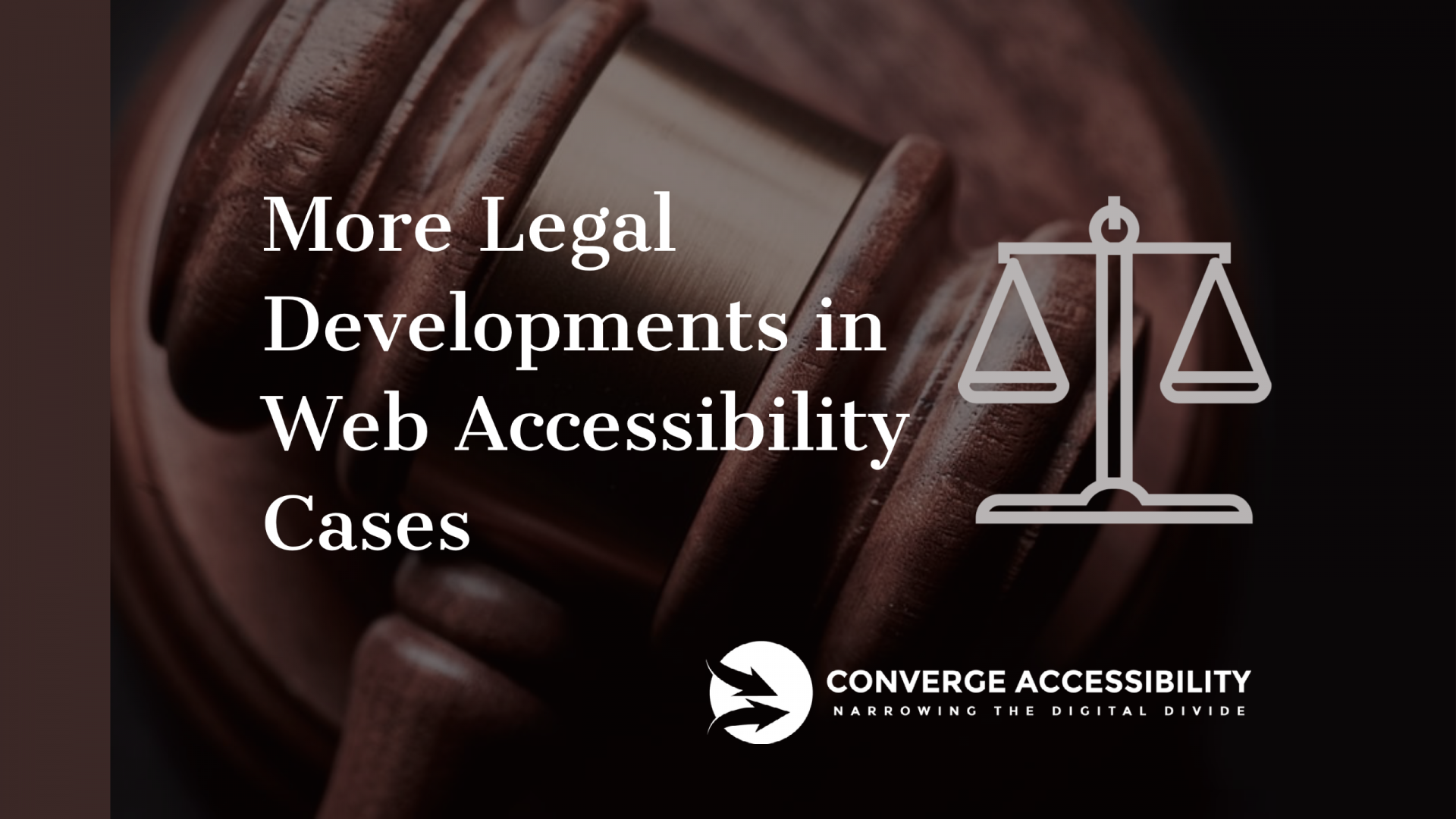 In my last post, I noted that new web accessibility lawsuits seem to be slowing down. I suspect the error is a Lexis problem as I just don't see a nation of litigious plaintiff attorneys foregoing such an easy stream of revenue. While new cases may be down, there are still plenty of existing cases making their way through the judicial process and two really interesting cases came through this week.

The week started with the Rizzi v. Hilton Domestic Operating Co., 2020 U.S. Dist. LEXIS 197728 (E.D.N.Y. 2020), which dealt primarily with standing to sue-- and what a plaintiff needs to identify in a complaint. It's also made interesting by the fact that I know Albert Rizzi quite well from his years of activity in the International Association of Accessibility Professionals (IAAP). Albert is a brash New York advocate and he's always great fun to be near at IAAP events.

The second case, which just came in today, is from the opposite side of the country. It's a new opinion, Martin v. Aspen Skiing Co., 2020 U.S. List. LEXIS 203037 (C.D. Cal. 2020). This case focused on the fact that plaintiffs can bring web accessibility cases under Unruh without having to prove an ADA violation. This is significant because, together with the Thurston v. Fairfield Collectibles of Georgia case, which I discussed in an earlier post, suggests that Unruh cases in state court really do create a big web accessibility threat for businesses.

I'm not a plaintiff attorney and I don't consider myself an accessibility advocate. I do push for what I think is right and I think my years at the Justice Department enforcing the ADA were the best years in my legal career. But now that I'm a consultant, I probably spend far more time helping defense attorneys shape their arguments than helping plaintiff attorneys. But, at the same time, I do feel sorry for what happened to my friend Albert.

So what happened? Well, in February 2018, Albert Rizzi sued Hilton hotels because their website was inaccessible. A month later, he filed an Amended Complaint and then, a Second Amended Complaint, and finally on October 30, 2019, he filed a Third Amended Complaint. Each time, the complaints were successfully challenged by defendants on various grounds. After Albert filed the Third Amended Complaint, the defendants moved to have the case dismissed permanently in February 2020. First, the defendants argued that Rizzi did not have standing to sue because he did not identify a concrete and particularized injury. Second, Hilton argued that the case should be moot because they had fixed their site since the lawsuit began. Interestingly, that prong of the argument was supported by an declaration from Kathy Wahlbin, another friend from the web accessibility community. Yes, our community isn't that large! And this time, the court agreed.

New York as a state is somewhat famous for the exacting procedural details in filing lawsuits. Aspiring attorneys there need to (or at least used to) have to spend weeks learning the nuances of New York's Civil Procedure Law and Rules and you could hear lots of grumbling about "CPLR" on the day of the bar exam. I endured this and thought I would never need it again. And then while working as a litigation associate in a New York law firm, I was asked to help evict the Copacabana night club (yes, THAT Copacabana night club) and discovered how incredibly easy it was to have a case thrown out for not meeting the exacting requirements of New York. Fail to describe every detail of the nightclub? Case dismissed. Fail to verify that the person handed the summons was the owner? Case dismissed. Fail to recite the proper incantation when praying to the Gods? Case dismissed. It's no wonder that, in New York, it's virtually impossible to evict a tenant!

This tendency for exactness apparently carries over to the Federal judiciary. Albert's mistake, according to the court, was that he didn't take really amazing notes when he was visiting the Hilton website-- and so he couldn't provide a particularized summary of his injuries. Specifically, a plaintiff must identify:

I used to think that New York went overboard in how hard it made litigation for plaintiffs. Then I worked on some web accessibility cases from the defense side in California, where the pleading rules are apparently a bit more lax. The problem, of course, is that web sites are constantly in flux. A commercial website in particular can be updated on a weekly-- or even daily-- basis with new functionality. For instance, a sale this week may mean a new popup gets placed on the site. Or, as popular items become available, different announcements get made in eye-catching locations. If Heraclitus were alive today, his famous expression would likely have been, "you can't visit the same website twice."

The reason this is relevant is because, as a defendant in a web accessibility lawsuit, it is really hard to defend yourself if you don't know what your website looked like at the time the plaintiff visited your site. Because websites change constantly, it is really important to know the date and time a plaintiff visited your site. You also need to know what the particular features were that caused the problem. Instead, plaintiffs outside of New York tend to use very generalized allegations-- and this will be relevant when we discuss the second case that caught my eye.

Two years is an eternity in technology. And during that time between 2018 and 2020, Hilton was able to fix all of the problems on their website. So, in addition to dismissing Albert's case because he lacked standing, the court also dismissed it because it was now moot. And that also brings us to our second case, so let's talk about that one now.

In reading over the Aspen Skiing Company case, it's so clear that Albert would have had an entirely different experience in a California court.

In this case, Dominick Martin and Cheryl Thurston (yes THAT Cheryl Thurston) sued Aspen Skiing Company in California state court because it's website was allegedly inaccessible. Aspen Skiing Company removed the case to the federal district court in California and the the question was really whether the federal court or the state court should hear the case-- and the Federal court sent the case back to state court. That might not sound like the most exciting issue but it's the reasoning that the court used to get there.

In general, a federal court has subject matter jurisdiction (i.e. the types of cases it can here) in two general cases. First, it can hear a "federal question" case. This is where the case involves something that implicates a Federal law-- like the ADA. Second, a court can hear a "diversity of jurisdiction" case. These are cases between citizens of different states where the amount in controversy rises above a basic dollar threshold (currently, $75,000). You'll recall that state courts can also have jurisdiction over cases involving citizens of different states, such as in the Fairfield Collectibles case (but remember that the Fairfield case was really about personal jurisdiction and not subject matter jurisdiction).

In Aspen Skiing, the plaintiffs were suing under California's Unruh Act and not the Americans with Disabilities Act. Therefore, the federal court didn't have federal question jurisdiction. Also the plaintiffs agreed that the amount in controversy didn't arise to $75,000 so there was no diversity jurisdiction. The defendants argued, however, that because the Unruh Act states that a violation of the ADA is automatically a violation of Unruh, the case must ultimately involve the ADA. The court wasn't persuaded by this faulty logic; an Unruh claim can exist completely independently of an ADA claim. And, furthermore, even if there was an ADA violation at the heart of the Unruh claim, that would not create federal question jurisdiction.

So WHY is this relevant to web accessibility lawsuits and Albert Rizzi's case? First, Aspen Skiing reminds us that Unruh claims can exist completely independently from ADA claims. For instance, there is no requirement of a "nexus" between an online activity and a bricks-and-mortar "place of public accommodation." And, given the breadth of covered entities under Unruh, the scope of potential defendants is far broader-- and potentially includes entities like website designers. Second, you'll recall that California state courts have broad personal jurisdiction and can potentially reach almost any company in the United States. Third, an injury under Unruh includes treble damages (with liquidated damages of $4,000 per claim), which is very different from the ADA (which only provides for attorney's fees and injunctive relief). The bottom line here is that fixing a website wouldn't moot a claim under Unruh because the plaintiff still has the claim for money damages. And that made me think back to Albert's claim and how his case likely would not have been mooted had he brought it in California.

There really isn't anything startling or new about either the Hilton or the Aspen Skiing cases, but that doesn't mean their not useful resources.

0 comments on “Interesting Recent Cases on Standing, Mootness and Jurisdiction”