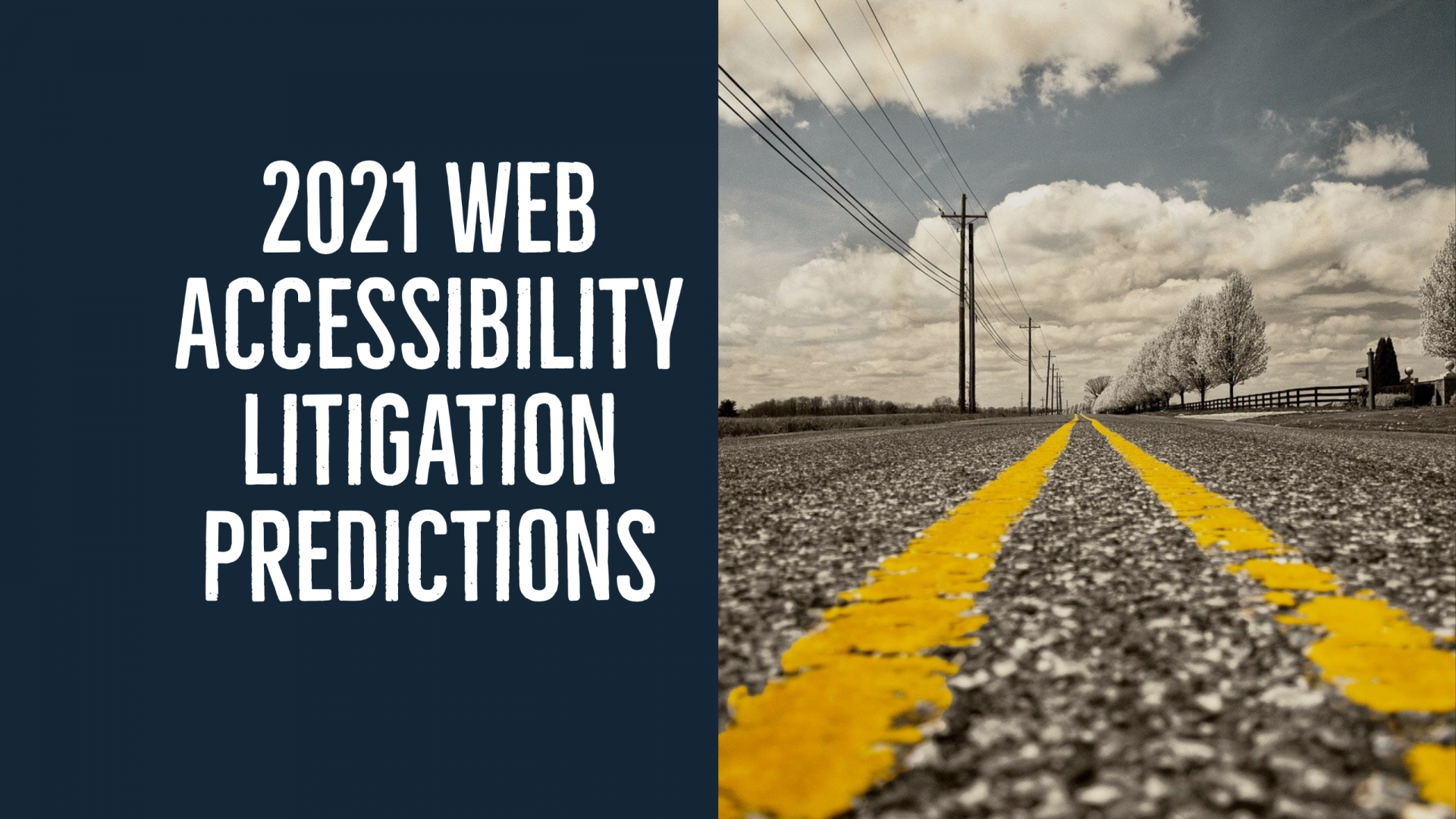 Looking to 2021: What Will Happen in Web Accessibility Litigation

Wow, it has been one insanely busy week. I've been neck deep with two coding projects-- one was all CSS and JavaScript and the second one was all PHP. While I don't code often, it's an ugly rabbit hole when I do. I'm so glad it ended on Friday.

In the middle of it all, I got a quick and welcome break when Jack McElaney texted me. We got to chatting and agreed it might be good for me to offer my thoughts about what will be happening in 2021. Why? Well, I don't have the perspective of a defense attorney, who tend to warn clients about every danger lurking around the corner. I also don't have the perspective of a plaintiff attorney. They tend to focus on their accomplishments and remind all of us how much more work needs to be done. Instead, my perspective is very much "middle of the road". And my predictions aren't filled with perfectly sunny days or stormy ones. So here is my short, boringly straight down the middle prediction for what we are going to see in 2021.

In 2020, I sensed that there was a real uptick in the number of cases filed in California state courts alleging web accessibility discrimination under California's Unruh Act instead of (or in addition to) the Title III of the Americans with Disabilities Act (ADA). And, when defendants tried to force some of those cases to be removed to U.S. District court, a number of courts refused. This makes sense as California courts are courts of general jurisdiction (they can hear any legal issues that arise in their region) while Federal district courts are courts of limited jurisdiction (they can only hear specific types of issues). State courts appear to have slightly lower filing fees and are probably a more familiar venue for most California attorneys. While I'm not admitted in California, my sense is that its state courts are more receptive to ADA cases judging from opinions like Thurston v. Midvale Corp. (Cal. Super. Ct. 2018), aff’d by 39 Cal. App. 5th 634, 650-51 (Cal. Ct. App. 2019). But, in order to bring a case in California, attorneys generally have to be admitted to the bar in California-- and the New York and Florida attorneys who have traditionally brought most web accessibility cases likely won't want to share fees with California attorneys. So, my prediction is that cases will continue to be brought in New York and Florida in 2021-- it's just that California courts (and notably California state courts) will see a definite rise in 2021.

Standing to Sue Will Be a Bigger Issue

The treatment of the legal principle of "standing to sue" by the courts has been all over the map in the last few years. In a nutshell, in order to bring a lawsuit, a plaintiff must have suffered an "injury" that can be remedied by the law. Early on, a bunch of credit unions were sued by plaintiffs who had no intention of becoming their customers-- and the National Association of Federally-Insured Credit Unions did a great job asserting that the plaintiffs did not have standing because they  could not have suffered an injury. In response, some clever plaintiffs argued that they were asserting claims as "testers" and, while they may not have suffered an injury, their claims are representative of other potential people with disabilities who would be harmed by the defendant's inaccessible website. I've blogged previously about how this has been treated differently by different courts. Part of the reason that these cases turn out differently has to do with the different ways that courts treat standing. But, I've also noticed that, in general, the courts find it easier to dismiss serial plaintiffs in hotel reservations cases than regular web accessibility cases.

I consider hotel reservation cases as a weird subset of web accessibility cases. In these cases, a plaintiff isn't alleging that the design of the website itself is inaccessible (like a regular web accessibility case). Instead, they are alleging that the hotel didn't provide an adequate description of its accessible guest rooms, as required in the Title III ADA regulations at 28 C.F.R. § 36.302(e)(1). And, while there are exceptions (e.g. Kennedy v. Nisha, Inc., 2020 U.S. Dist. LEXIS 170829 (M.D. Fla. Sept. 17, 2020)), the trend seems to be that a plaintiff needs to assert some concrete intention to be a guest at a hotel before they can sue them. This seems logical to me because it squares with the credit union cases described earlier-- in general, you're facing an uphill battle as a plaintiff unless you can honestly say that you have some concrete intention of becoming a customer.

Standing can also come up in another way-- specifically, how particular your allegations are in your complaint. Earlier this year, I blogged about Albert Rizzi's case against Hilton Hotels. Albert is blind and he sued Hilton because their website was inaccessible (so it's a traditional web accessibility case). The court (repeatedly) dismissed Albert's claim because he didn't assert the exact date and time he visited the website, the exact feature(s) that were inaccessible, and the specific consequences of that inaccessible feature. As a consultant who has helped his fair share of defendants in web accessibility cases, I can appreciate the exactitude required by the court because it's almost impossible to opine on the accessibility of a commercial website from three months ago when those features are constantly in flux. But I do think the court expected a bit too much from plaintiffs in Albert's position.

My gut tells me that the courts are tiring of web accessibility cases and that many will be interested in entertaining easy ways to kick them out (e.g. by finding that the plaintiff has no standing to sue) increasingly in 2021 and beyond.

New Regulations by the Department of Justice... Eventually But Not Necessarily in 2021

As everyone knows, the Department of Justice started a rule making to update its Title II and Title III regulations to cover web accessibility back in 2010. After considerable dithering, the regulations went no where and, with the beginning of the Trump Administration, the regulations were officially shelved. This seemed idiotic to me as developing these regulations was universally supported by disability groups, government, academia, and, specifically, private businesses. Developing clarity on exactly what organizations-- and private businesses in particular-- had to do to meet Title III would help avoid the nationwide wave of web accessibility cases.

With the Biden Administration, it's fully expected that this rule making will get started again. I think this will happen too-- just not as quickly as we'd like to see. Why is that? Well, because these rules would be created by the Civil Rights Division at the Justice Department. History tells us that getting an appointment in that division takes time, because it tends to be a highly controversial post. But disability rights are only one topic covered by the Division, which also oversees a plethora of legal issues including voting rights, gender discrimination, and racial discrimination. I can easily see the Division being overwhelmed with changing the government's course after the Trump Administration-- most acutely just by having to hire staff lost during the Trump years. While I don't have official numbers, my understanding from retirees from the Disability Rights Section was that its numbers were down by at least 30%. Also, the Black Lives Matter movement will likely have a profound effect on the Division and our nation's police forces will be a strong priority. I happened to spend a year working on a detail to the Division's Police Misconduct Task Force, where I helped secure the nation's first consent degree of police misconduct by the Department. Getting it done was a MASSIVE undertaking by a whole team of people.

Why do I mention this? Because it's important to set reasonable expectations for a timeline to getting the rule making started. First, the Attorney General needs to be confirmed. Then, the Assistant Attorney General for Civil Rights has to be confirmed. Then, the Civil Rights Division needs to restore its headcount of attorneys and other staff lost during the last four years. And then it has to start work on an enormous number of important projects-- only one of which is starting the web accessibility standards. So my prediction is that we would be very lucky indeed to see this effort started in 2021. Miracles do happen and it may get fast-tracked but I'm not holding my breath.

Back in October, I blogged about the new bill, the Online Accessibility Act. And, as most of us predicted, that bill had a quiet death last month. While it could get resurrected with the new term in Congress, I'm not holding my breath. Why? Because I think most people agree that it isn't necessary anymore because the current administration is not opposed to creating new web accessibility regulations.

Had the OAA become law, it would have introduced a whole new layer of complexity for the Disability Rights Section. The time and effort required by laws like this could be better spent creating clearer regulations under the existing framework. Simply put, "if it ain't broke, don't fix it." Title III certainly isn't perfect but it's also far from broken-- just patch up the current regulation to handle web accessibility and things should be fine.

But Who Knows What the Future Holds?

The last four years-- and especially the last year-- have taught all of us not stand by our predictions. I yearn for the boring old days my life was predictable. After all, that expression, "may you live in interesting times" was always intended as a curse and not a blessing. So, if I could have one wish for all of us in 2021, it's that our year will be uninteresting. Maybe boring and middle-of-the-road?

0 comments on “Looking to 2021: What Will Happen in Web Accessibility Litigation”