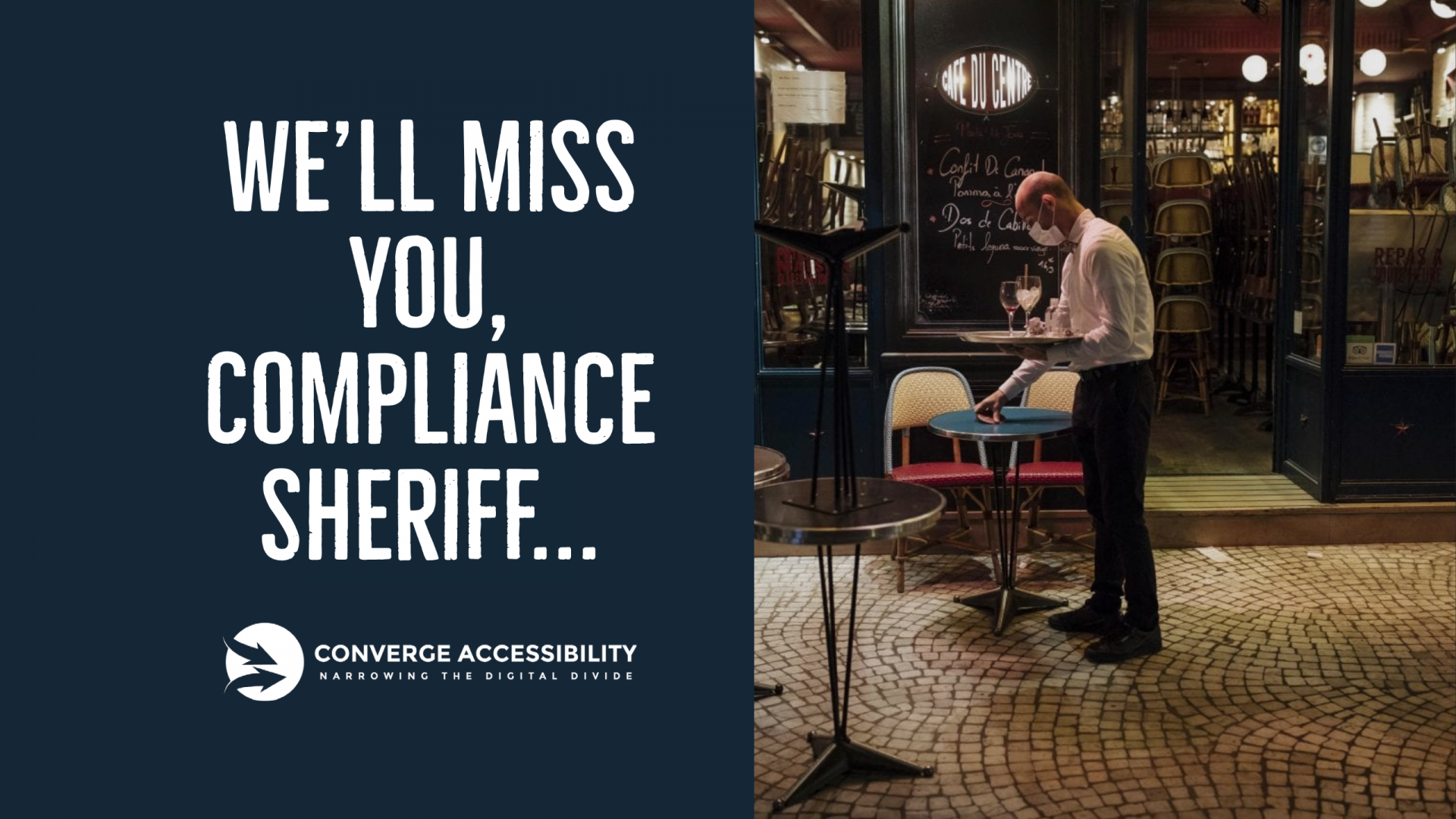 Compliance Sheriff: End of an Era

Last week, I was saddened to hear from my friend Brenton West that, at the end of 2021, AppGate would be discontinuing Compliance Sheriff. Brenton was reaching out to trusted partners who could help Compliance Sheriff's customers transition their web accessibility programs to other consultants and products that could help.

Jeff and I both have a long relationship with Compliance Sheriff but mine is slightly longer. I thought now would be a good time to reflect back on the company, it's history, and my thoughts on the current landscape in the changing market of automated testing tools.

Our Personal Journey with Compliance Sheriff

My journey with Compliance Sheriff began over 20 years ago when I was still a trial attorney at the Justice Department. In those early days, I worked on helping the Federal government implement Section 508 of the Rehabilitation Act by making its IT systems-- and particularly its millions of web pages-- accessible to people with disabilities. It was around 1998 and the very first company I met in this space was HiSoftware, which would eventually go on to create Compliance Sheriff many years later.

HiSoftware was a real trailblazer in recognizing the importance of automated testing in websites. From the mid-1990's, they saw how web sites would become enormous, sprawling expanses that humans could never test manually. As the Federal government launched into web accessibility, it seemed like there wasn't a Federal agency that wasn't using HiSoftware's products, AccVerify and AccMonitor, to fix its websites. Eventually, SSB Bart (the predecessor of today's Level Access) and Deque would come along but HiSoftware was definitely the oldest and biggest kid on the block. Back in those early days, SiteImprove was barely a twinkle in its founders' eyes.

Fast forward ten years and I was invited by HiSoftware's new CEO (Kurt Mueffelmann) to lead the company's efforts in accessibility consulting services. It was now 2008 and HiSoftware had just transition from its legacy Acc line of products to Compliance Sheriff. Jeff joined HiSoftware a few months later. I also brought Thomas Logan, Michael Adams, and, eventually, Chris Keroack onboard. Everything seemed to be going great and the world was our oyster.

But, as I've come to learn, that doesn't mean that a software company should try to be an expert in all of these domains unless it's ready to hire a TON of talent in all of these areas. And so we would become victims of our own success. The reason is that the greatest strength of Compliance Sheriff was its ability to customize its rule sets; any customer could make Compliance Sheriff scan for anything as long as there was some logic search parameters for it to use. And so this meant it was easy to search for credit card numbers, birth dates, social security numbers, or a host of other data. And this greatest strength could also become our greatest weakness.

From the marketing side, as we started to become a jack of all trades, the company started to appear to our customers to be a master of none. First, we merged with Cryptzone, a Swedish company that focused on network security solutions. And then Cryptzone was acquired by Cxtera, which primarily focused on data farms and cloud computing. Cyxtera then spun off AppGate (named after Cryptzone's original prize product) to focus on the services companies while the original Cyxtera brand could go on to focus on cloud computing. With each merger came a new change in identity, despite our best attempts to keep the Compliance Sheriff brand always recognizable to our customers. Many of our customers started asking whether we still had a commitment to accessibility, even though we had a strong team that continually attracted some of the best talent on the market.

Despite outward appearances, accessibility is a rough market to be in. And our competitors could smell blood in the water right after our first name change to "Cryptzone". And web accessibility was just starting to take off. Our declining percentage of market share and growth in the market fueled our competitors in a way that our founders could only have dreamed about.

Hindsight is always 20/20 and looking back, there are bunch of business decisions that we can question. AppGate reshuffled resources in the company impacting accessibility. And then came COVID-19.

Whether Compliance Sheriff's decline is due to bad luck or bad decisions will depend on whom you ask-- and how much they've had to drink!  But, whether you worked with Compliance Sheriff or you competed against them, I think it's worth raising a glass to salute them-- it was a heck of a good run and the world is a better place because Compliance Sheriff was in it. And that reminds me... When HiSoftware hit the scene in 1998, so too did a popular song, which now seems to have an eerie but different significance.

0 comments on “Compliance Sheriff: End of an Era”