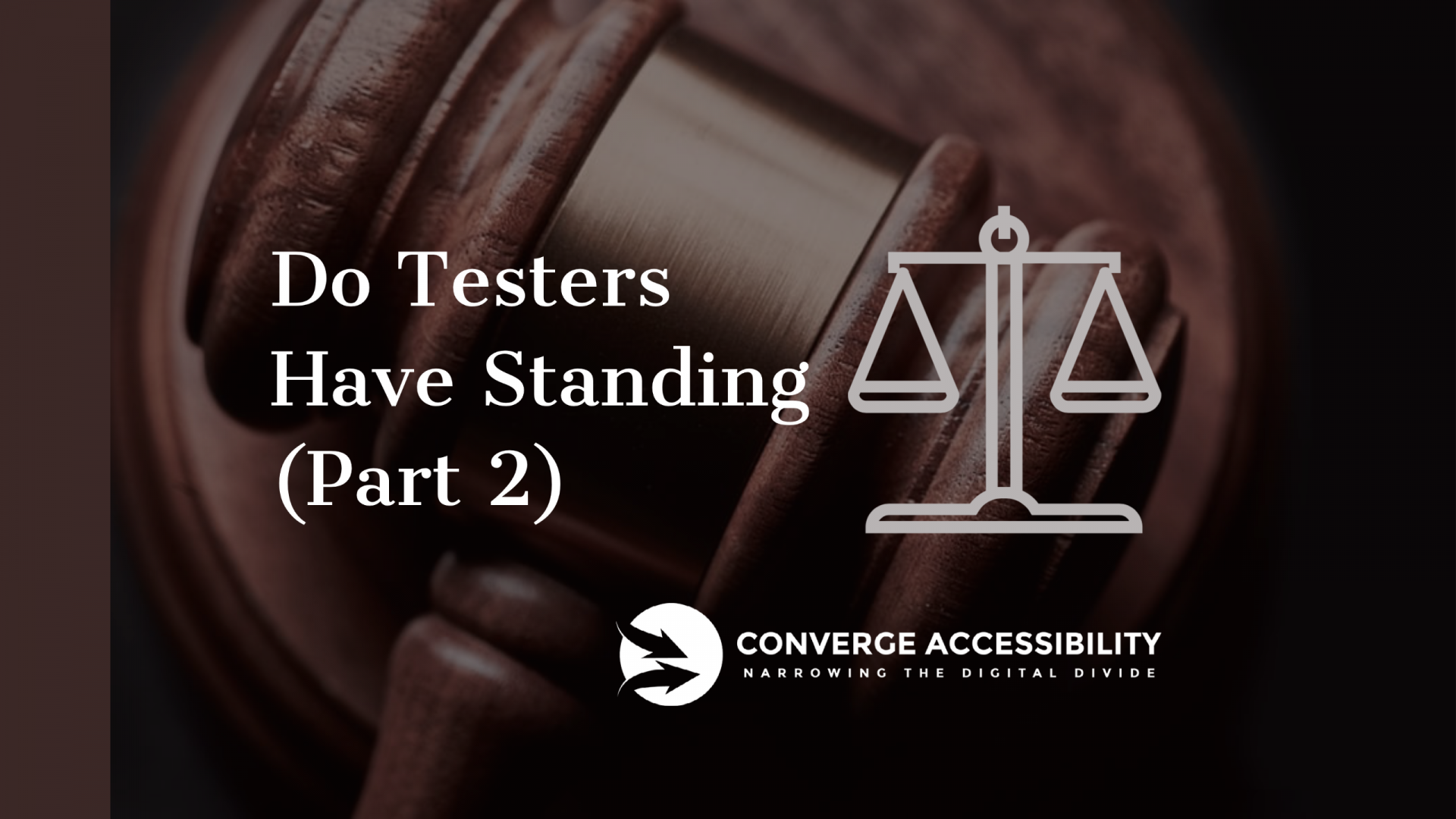 Retesting the Standing of Testers

Last week, I made a quick video blog to talk about a relatively new case, Mejico v. Alba Web Designs, LLC, 2021 U.S. Dist. LEXIS 13354 (W.D. Va. 2021). In the process, I read through months and months of opinions from my Lexis feed and didn't mention a lot of other cool cases. Now, I'm thinking it may be a good idea to just blog about recent decisions just because so many read my blog just for legal updates.

Over the last week, there have been a number of decisions that discuss the standing of testers. A few months ago, I blogged about how courts were limiting the ability of "testers" (people who sue a company for discriminatory practices even though they have no interest in becoming a customer)-- and several opinions had flatly stated that testers cannot have "standing to sue" because they could not allege an injury. Well, the pendulum is now swinging back in the other direction. Yes, this is an area where getting in front of the right court with the right lawyer really makes a difference!

A Successful Trio for Deborah Laufer

When I last blogged about testers in November, I had some misgivings about how the court treated Deborah Laufer (a known serial plaintiff in ORS cases) in Laufer v. Laxmi & Sons, 2020 U.S. Dist. LEXIS 216752 (N.D.N.Y. Nov. 19, 2020). Despite that one setback, it appears that Ms. Laufer had three new wins, vindicating her ability to sue as a tester in hotel ORS cases.

All of Ms. Laufer's cases involve hotel online reservation systems (ORS), which seems to be where tester issues come up most frequently. The Department of Justice regulations requires hotel ORS systems to identify accessibility features in the hotel and guest rooms. 28 C.F.R. § 36.302(e)(1). This is a little different from a typical web accessibility case where a plaintiff alleges barriers that make the site itself unusable. In hotel accessibility cases, there is usually no issue accessing the site-- instead, it is the contents of the site rather than the design of the site that is relevant. While ORS cases are slightly different from the run-of-the-mill web accessibility case, there are a number of similarities that make them highly relevant. In both types of cases, a plaintiff suffers an "injury" by visiting a website-- either that injury is caused by the site being inaccessible or by the site providing inadequate information.

The three wins for Ms. Laufer are:

The first two cases are from the Second Circuit, as upstate New York appears to be a favorite vacationing spot for Ms. Laufer. The third case is from the Seventh Circuit, which we're slowing to starting to hear more opinions from. All three cases involve roughly the same facts-- Deborah Laufer visited the hotel websites and was unable to find adequate information about accessible guest rooms or could not reserve accessible rooms. In all three cases, she alleged that depriving her of adequate information about guest rooms was itself the injury and that she intended to revisit the sites in the future to see if the information was updated. In all three cases, she did not allege that she an intention of becoming a guest at the defendant's hotel.

Both the Drashti Batavia and Jamestown Hotel opinions were written by Magistrate Judge Michael Roemer and use a similar analysis. In both cases, the court analyzed precedent, including the Laxmi & Sons, and rejected their reasoning and conclusions. Citing specifically to Laxmi & Sons, Magistrate Judge Roemer noted,

Without intent to possibly stay at the defendant hotels, these courts found no concrete or particularized injury and observed nothing more than 'bare procedural violations' insufficient to confer standing. This Court respectfully disagrees.

Laufer v. Jamestown Hotel, 2021 U.S. Dist. LEXIS 55471 at *16 (W.D.N.Y. 2021). The inability to stay at the hotel was not the injury; instead it was the inability to "obtain statutorily required information necessary to evaluate the accessibility of defendant's hotel and its rooms" that was the injury. Id at *13.

Ms. Laufer's third win came in Laufer v. Q III Development, LLC, 2021 U.S. Dist. LEXIS 60882 (C.D. Ill. 2021), where District Judge Sue Myerscough ruled on a motion to dismiss in Ms. Laufer's lawsuit against the Eagles Nest Hotel in Quincy, Illinois. Again, Ms. Laufer alleged that she was a tester and visited the hotel website in order to identify descriptions of accessibility features in hotel rooms. In order for a tester to have standing, the court noted, they must still have suffered an injury in fact, such as discrimination contemplated by the statute. In concluding that Ms. Laufer had standing, the court indicated that not providing the proper information on its website was itself exactly the kind of discrimination and injury sufficient for standing.

The Court concludes that Plaintiff has established standing. Plaintiff alleges that she visited the reservation websites and discovered that the websites do not contain accessibility information required by the ADA. The inability to obtain information that is statutorily mandated to be provided is an injury-in-fact sufficient to establish standing.

While I generally agree with the principle that testers should be able to enforce civil rights legislation, I did feel slightly uneasy with the potential breadth of the wording of this conclusion. First, there's the question of whether Ms. Laufer needs to be a person with a disability that would be affected if she actually intended to book a room. In Ms. Laufer's specific case, it is easy enough to find that she has standing as a tester because she has a physical disability and she really does need the room descriptions. The court held, however, that merely being unable to obtain statutorily mandated information is enough to create an injury-in-fact. This could mean that Ms. Laufer would not have to be a person with a physical disability-- or potentially not even have any disability at all-- as long as she was testing on behalf of others who would suffer an injury if they tried to book a room. My second problem with the court's conclusion that an injury-in-fact occurs merely because a plaintiff cannot not find accessible room descriptions in the hotel's ORS is that there is then no reason to consider whether Ms. Laufer is a tester at all. After all, if encountering the lack of information is the injury itself, then Ms. Laufer was injured directly and not just as a tester. That makes no sense at all-- and I doubt that is what the court intended. Instead, I would read the court's conclusion a bit more cautiously and use it for the proposition that testers can have standing to sue in hotel ORS cases if they have a disability that would be affected by a lack of accessible room descriptions and they actually encounter a hotel website lacking adequate accessible room descriptions.

A Not So Successful Outcome for John Mahoney

The fourth case that came up in my recent Lexis feed is Mahoney v. Waldameer Park, Inc., 2021 U.S. Dist. LEXIS 60477 (W.D. Pa. 2021). This was a more traditional web accessibility case but it had a surprisingly different outcome from what I expected.

John Mahoney is a visually-impaired screen reader user who tried to visit the website for Waldameer Park (www.waldameer.com) "at least once in the past" and, because the website was inaccessible, he could not plan a visit to the park. He then sued the park and later amended his complaint to alleged that he planned to visit the park but only if the website became accessible. But, in order to do so, he would need to research what the park offered through its website. The court went through a fairly careful analysis and, focusing on Mr. Mahoney's inability to show a definite and specific intent to visit the park, he failed to establish an injury.

How to Make Sense of These Different Opinions

How do we make sense of these wildly different outcomes? In Ms. Laufer's case, she freely admits that she has no intention of visiting the hotels that she was suing and the courts agree that she has suffered an "injury" just from visiting the hotel websites and not finding adequate room descriptions in the ORS systems. But in Mr. Mahoney's case, he did say he would visit the park n the future yet the courts say he can't prove an injury. What gives?

Part of the answer is that testers are given a somewhat special status in civil rights lawsuits. There may be something to that line of reasoning because even the Mahoney court acknowledged that it has granted standing to testers in other cases before noting that "Mahoney is no tester." Mahoney, 2021 U.S. Dist. LEXIS 60477 at *19. But, before every plaintiff attorney in web accessibility cases starts alleging their clients were merely "testing" the websites for companies that they are suing, I think there is more going on. With hotel ORS cases, we can point to a specific provision in the ADA regulations that focuses on exactly what hotels need to include in their room descriptions (28 C.F.R. § 36.302(e)(1)), whereas in traditional web accessibility cases, courts look to the general non-discrimination and effective communication requirements. In both of the Laufer opinions, Judge Roemer seemed to really focus on the fact that there was a very specific provision in the regulations that the hotels had violated. But, even that doesn't really explain the different treatment.

Instead, I think the real explanation is simpler: courts are sick and tired of web accessibility lawsuits and are willing to go out of their way to hold a plaintiffs feet to the fire and require them to show very clearly that they suffered real injury. Hotel ORS cases are a rarer type of case (despite the best efforts of Ms. Laufer to sue as many of them as possible) and the accessibility requirement in the regulations is clearer but, as my November blog post makes clear, even they get routinely kicked out

Courts are given a lot of deference in their decisions on these kind of motions. Some judges are more tolerant for sloppy lawyering than others. But one thing is clear: if you are a plaintiff attorney doing web accessibility cases, you really need to be as specific and definite in your allegations as possible. And, if you're a defendant in one of these cases, you'll want to remember that you can use cases like Mahoney or Rizzi v. Hilton Domestic Operating Co., 2020 U.S. Dist. LEXIS 144884 (E.D.N.Y. Aug. 11, 2020) to pick apart your opponent's case. Nonetheless, in every case I come across, I recommend just trying to settle early-- it's never worth the risk that you're going to draw the wrong judge and plaintiff attorneys are usually more than happy to settle early for a much lower value instead of doing the real work needed to litigate a case.

0 comments on “Retesting the Standing of Testers”