It's Friday afternoon, but you won't see this post until Monday morning. I'm spending this weekend mildly frantic. Why? Well, because it's conference season and I have a keynote presentation at DALS 2021 coming up. I recently took a count and I've done well over 300 presentations at various conferences, but this one is different. But I'm also committed to these legal updates so I wanted to focus on it now. Fortunately, Lexis didn't fill my inbox with cases but the material that has come in is pretty interesting.

The first case this month is Cota v. Porven, Ltd., 2021 U.S. Dist. LEXIS 178933 (S.D. Cal. 2021). This is a bit of a complicated case because it brings in a new law (the Class Action Fairness Act), some new legal concepts, and a few twists on older legal concepts we've discussed before. In this case, Julissa Cota is a blind serial plaintiff in California who sued Porven (a Delaware Corporation) because they run the allegedly inaccessible Porcelanosa website (which sells kitchen and bath hardware that are available also at its physical stores). Her class action lawsuit was based on the ADA, California's Unruh Act, and the Class Action Fairness Act ("CAFA"). The defendant moved to have the Unruh claims dismissed.

When I was back in law school, I learned that courts had "pendant" or "supplemental" jurisdiction over claims that arose from the same operable facts. What this means is that, while Federal courts usually don't address state law claims, they will hear those claims if the same set of facts gave rise to a federal claim. This makes sense as a matter of judicial economy: we shouldn't have parallel cases in state and federal courts if we don't have to. But the decision about whether to exercise that jurisdiction is discretionary. One factor that augured against extending this jurisdiction was that California had adopted heightened pleading requirements because of the flood of "construction-related accessibility claims." For instance, in California, the plaintiff needs to identify the number of claims that they have filed in the last 12 months. Also, district courts in California have held that the term "construction-related" includes website accessibility claims. The court noted that Ms. Cota had filed 55 disability discrimination claims in the Southern District of California. The court concluded that she may have likely filed her complaint in federal court just to avoid these heightened pleading requirements.

While that should have been the end of the story, there's also that pesky CAFA claim. As the court explained,

Id at *7-8 (citations omitted). And so, because all of these basic elements have been met, the court held that it had jurisdiction over the plaintiff's claim.

The impact of CAFA needs to be considered here. Now, Federal courts can hear just about any state court claim against an out-of-state defendant if they bring that case as a class action and allege that there at least 100 class members and over $5,000,000 in damages. And it's not like the plaintiff has to specifically identify those class members or prove $5,000,000 in damages-- they just have to allege it in their complaint.

The second case brings us to the other side of the country before we go right back to California. It also brings us back to one of my favorite topics: standing to sue. In Angeles v. Grace Prods., 2021 U.S. Dist. LEXIS 182317 (S.D.N.Y. 2021), Jenisa Angeles sued Grace Products, a beauty supply company, because its website was inaccessible and the defendant moved to dismiss.

Previously, I mentioned that some courts in the Second Circuit are sticklers when it comes to particularized injuries-- and the court neatly summarized what the court requires,

Id at *3-4. But Ms. Angeles knew what she was doing so she sailed through these pleading requirements easily.

But the defendant also claimed that the plaintiff had not suffered an injury because, if she was genuinely interested in purchasing the defendant's products, they could have called the company's telephone line and placed an order. And, citing good old Domino's Pizza, the court noted that whether a telephone line is a sufficient alternative to an inaccessible website is ultimately a matter of fact that cannot be decided on a motion to dismiss. Not a surprise but remember that the court didn't say that a telephone line can never be an adequate replacement for an inaccessible website.

The last case that came across my virtual desk was Erasmus v. Perry, 2021 U.S. Dist. LEXIS 184460 (E.D. Cal. 2021). In this case, a deaf plaintiff alleged that testimonial videos by patients at a cosmetic clinic were not captioned, deterring her from using the company's services. Of course, in order to bring an ADA lawsuit against a business for its inaccessible website, courts in the Ninth Circuit require that there be a nexus between the website and a physical place of public accommodation. The defendant argued that there was nothing in the website specifically preventing the plaintiff from accessing their cosmetic surgery clinic so a nexus didn't exist (apparently trying to get the court to accept the 11th Circuit's Winn-Dixie formulation). The district court disagreed noting that, "[n]owhere do Title III or its implementing regulations state that an inaccessible feature of a public accommodation must prevent an individual from accessing the accommodation's good or services for the ADA's protections to apply." Id at *12. Okay, nothing surprising so far.

The surprising part came next where the court noted that, "testimonial videos may often prove valuable to an individual considering whether to solicit a business's services by providing information about prior customers' experiences and the benefits and detriments the viewer is likely to experience if she obtains those services herself." Id at *13-14. This is a bit broader than most formulations of the nexus standard. Some elements clearly connect a website to a physical place of public accommodation. For instance, digital coupons that can be download and redeemed at a physical store clearly connect a website to a physical location. So does being able to make online purchases and return them at a physical store. Some features on a website create a weaker connection between a website and a physical place of public accommodation. This includes features like a store locator on a website (but remember in last month's legal update, I mentioned Brooks v. See's Candies, where a store locator wasn't enough to create a nexus). But this is the first time where I've seen general marketing material (like testimonial videos) creating a nexus sufficient in the Ninth Circuit. Mind you, I don't necessarily think that's bad (I've never liked the nexus test) but it is interesting...

ViacomCBS and the CVAA

One last "case" I'd like to mention is In re Pluto Inc., 21-1183 (Fed. Communication Comm'n Sept. 29, 2021)(available at https://docs.fcc.gov/public/attachments/DA-21-1183A1.pdf). This order is a consent decree between the FCC and Pluto Inc. (including its parent company ViacomCBS) in which Pluto agreed to pay a $3.5 million civil penalty and to ensure that closed captioning is provided on all of its internet-delivered video programming.

This is the first time that the FCC has used its enforcement authority to fine an organization for failing to provide captioning of internet-based content under the Twenty-First Century Communications and Video Accessibility Act of 2010 (CVAA), Pub. L. No. 111-260, 124 Stat. 2751 (2010) and sends a clear message to any organization that creates internet-based video content. While it won't send TikTok'ers to the poor house, it will have an impact on internet-based video content. Plus, it includes new requirements for audio descriptions and internet-based communications (including messaging applications). So if you build or create content relying on these technologies, be aware that the FCC is paying extra scrutiny.

This brings back a lot of memories for me. Back in 2008, I was asked to testify before the Congressional House Committee on Energy and Commerce about a draft version of the CVAA. I was the techno-lawyer geek among that day's witnesses and faced a ton of questions from Congressman Markey and my eventual governor (then Congressman) Jay Inslee. In my typical fashion, I took a middle-of-the-road approach advocating my support for the bill but with some basic limits on its enforcement reach. I guess I made an impact because everything I recommended was incorporated into the final law. While testifying before Congress is something that some people do all the time, it's a bit outside my normal bailiwick. Below is a photo of the occasion with (from left to right): myself, Sergeant Major Jesse Acosta, Larry Goldberg, Congressman (and now Senator) Edward Markey, Russell Harvard, Jamaal Anderson, and Dane Snowden. 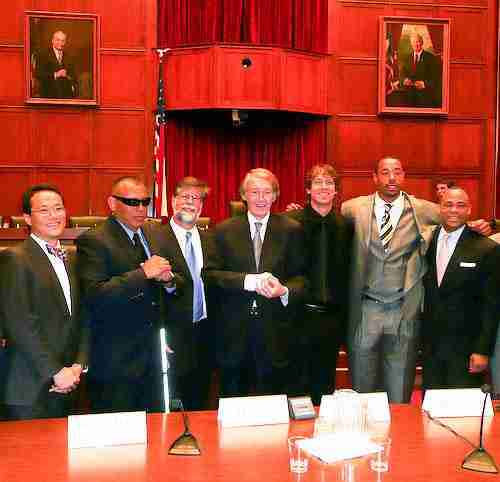 Special thanks to Jack McElaney at MicroAssist for giving me an early heads up on this decision! Specifically, he cued me on to an article on Variety.com that reported on the consent decree almost immediately. And, by the way, if you're not subscribed to Jack's newsletter, it's one of the most important resources I know of. I have no idea how he manages to keep his finger on the pulse of digital accessibility so closely.

Because of LEXIS's copyright restrictions, I can't attach copies of the opinions from Lexis. Instead, here are the courts' opinions from PACER: