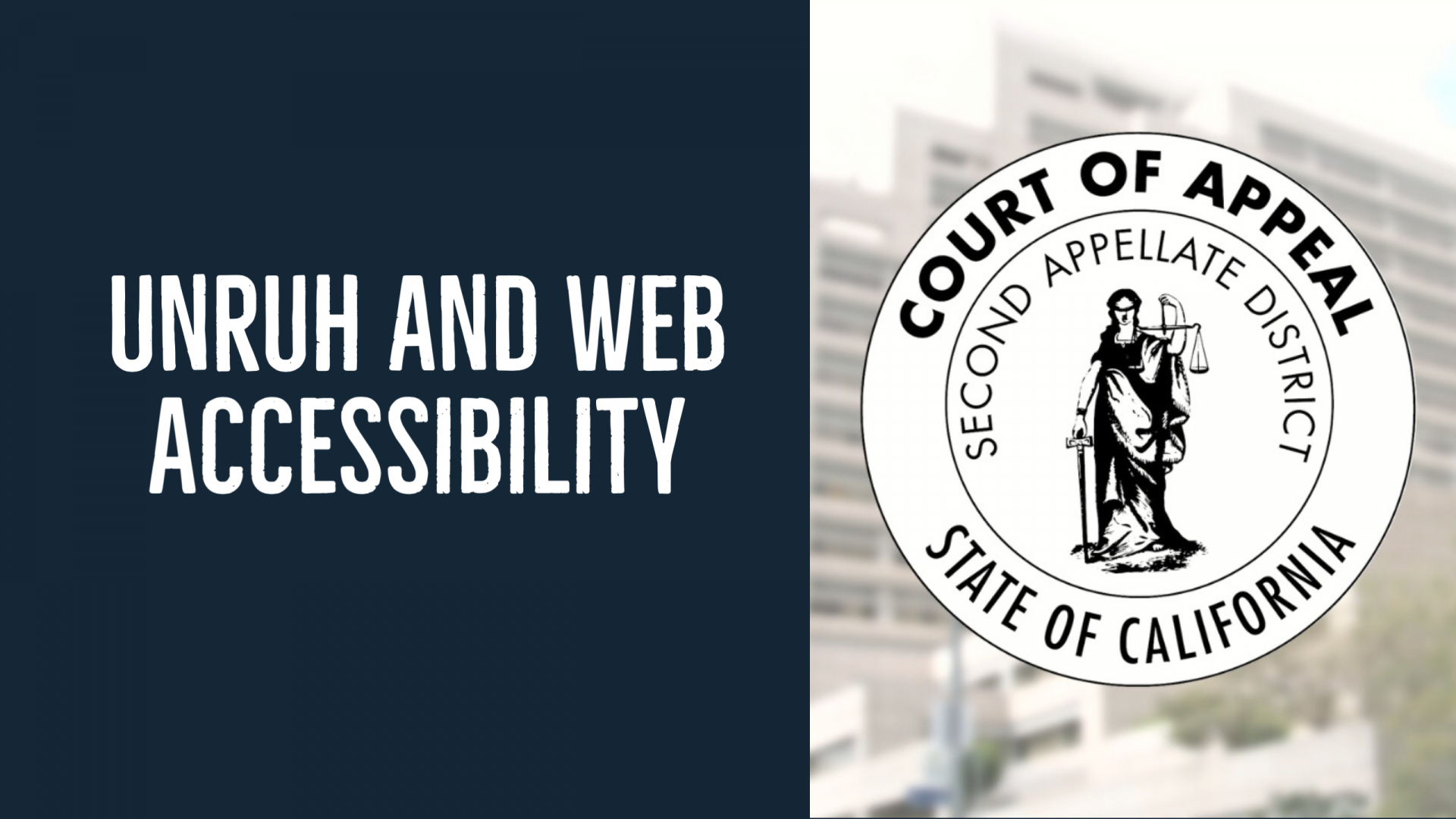 At the beginning of this month, a California state court of appeals in the Second Appellate Division ruled in Martinez v. Cot’n Wash, Inc., 2022 Cal. App. LEXIS 673 (Cal. Ct. App. 2022) that, absent proving intentional discrimination, the Unruh Act does not support a plaintiff bringing suit against a purely online-only business. That may seem like a startling result, but longtime readers of this blog will know that it was also quite predictable. Let’s explore why.

What Happened in Cot’n Wash?

First, let’s talk about what happened in the case. Cot’n Wash is a Pennsylvania company that sells cleaning products through its website. The company has no retail establishments at any physical location. Abelardo Martinez was a serial plaintiff who was blind and notified Cot’n Wash that its website was inaccessible. Cot’n Wash asserted that it believed its website complied with the Web Content Accessibility Guidelines (WCAG) 2.1, which Martinez disputed. Soon thereafter, Mr. Martinez sued Cot’n Wash. The trial court dismissed Martinez’s complaint and Abelardo Martinez appealed. Sadly, Abelardo died while the appeal was waiting to be heard and his brother Alejandro succeeded him in the lawsuit.

What Was the Appellate Court’s Ruling in Cot’n Wash?

In a nutshell, the appellate court ruled that, in order to bring an Unruh claim for disability-based discrimination, the plaintiff needs to either prove:

Mr. Martinez’s complaint could not support an ADA lawsuit because Cot’n Wash was a purely online company and thus failed the nexus test used in the Ninth Circuit. Mr. Martinez also couldn’t show that Cot’n Wash intended to discriminate against people with disabilities in creating its website. Thus, his complaint should be dismissed.

While I think that the result of the Cot’n Wash decision was perfectly predictable, the opinion still makes useful reading for a number of reasons.

The court in Cot’n Wash spent a lot of time examining what constitutes intent under Unruh. To do that, it examined the California Supreme Court’s opinion in Koebke v. Bernardo Heights Country Club, 115 P.3d 1212 (Cal. 2005), which set forth the principal that,

a plaintiff seeking to establish a case under the Unruh Act must plead and prove intentional discrimination in public accommodations in violation of the terms of the Act. A disparate impact analysis or test does not apply to Unruh Act claims. Nonetheless, we acknowledged that evidence of disparate impact could be admitted in Unruh Civil Rights Act cases because such evidence may be probative of intentional discrimination in some cases.

Id. at 1229. This means that, if a defendant engages in conduct (e.g., deploying a website) without having any reason to suspect it is inaccessible to people with disabilities, they did not intend to discriminate—and so they can’t be sued under Unruh. And similarly, even when they’re told that their website continues to be a barrier, they have no duty under Unruh to fix that website.

So how can a plaintiff prove intent? I think a plaintiff can succeed if they can prove that the defendant meant to hurt them, understood that their actions would likely harm them, or acted with total disregard that their actions may harm them. In the context of web accessibility, I think this means that the defendant knew that they could have created an accessible website but failed to. And, in these times when it seems that just about everyone is being sued for having inaccessible websites, this may be increasingly easy to prove. For instance, any of the following fact scenarios could create evidence of intentional discrimination:

The court in Cot’n Wash provides a surprisingly thorough overview of how different courts have answered the question of whether websites are “places of public accommodation” under Title III of the ADA. If you’re reading this blog for the first time or you are new to web accessibility, then you should definitely read the opinion to get an overview.

But what I really found useful in the opinion was its descriptions of how Congress and DOJ have addressed (or not addressed) web accessibility since the passage of the ADA. For instance, I had no idea that DOJ testified to Congress about website accessibility in 2000, 2006, 2008, and 2010. Reading this portion of the opinion is a harsh rebuke for DOJ’s inaction over the years. As much as I have criticized DOJ for their inaction, however, I’m not sure that a new regulation could have saved Mr. Martinez’s complaint. The reason is that, while courts are supposed to defer to an agency’s interpretation of a statute under the Supreme Court’s decision in Chevron U.S.A., Inc. v. Natural Res. Def. Council, 467 U.S. 837 (1984), the Supreme Court has more recently reminded us that the courts have little trouble reining in regulations when the courts perceive that agencies are expanding the scope of regulations beyond the entities that they were intended to cover. West Virginia v. EPA, 142 S. Ct. 2587 (2022).

Martinez v. Cot’n Wash is a useful opinion, even if it doesn’t break new ground because it leaves open the possibility of suing purely online-only companies in California for damages—but only if the plaintiff can show intentional discrimination. It’s also a good read if you’re new to web accessibility or just feel disappointed that the Department of Justice has dropped the ball on web accessibility and has done little to pick it up for the last 20 years.