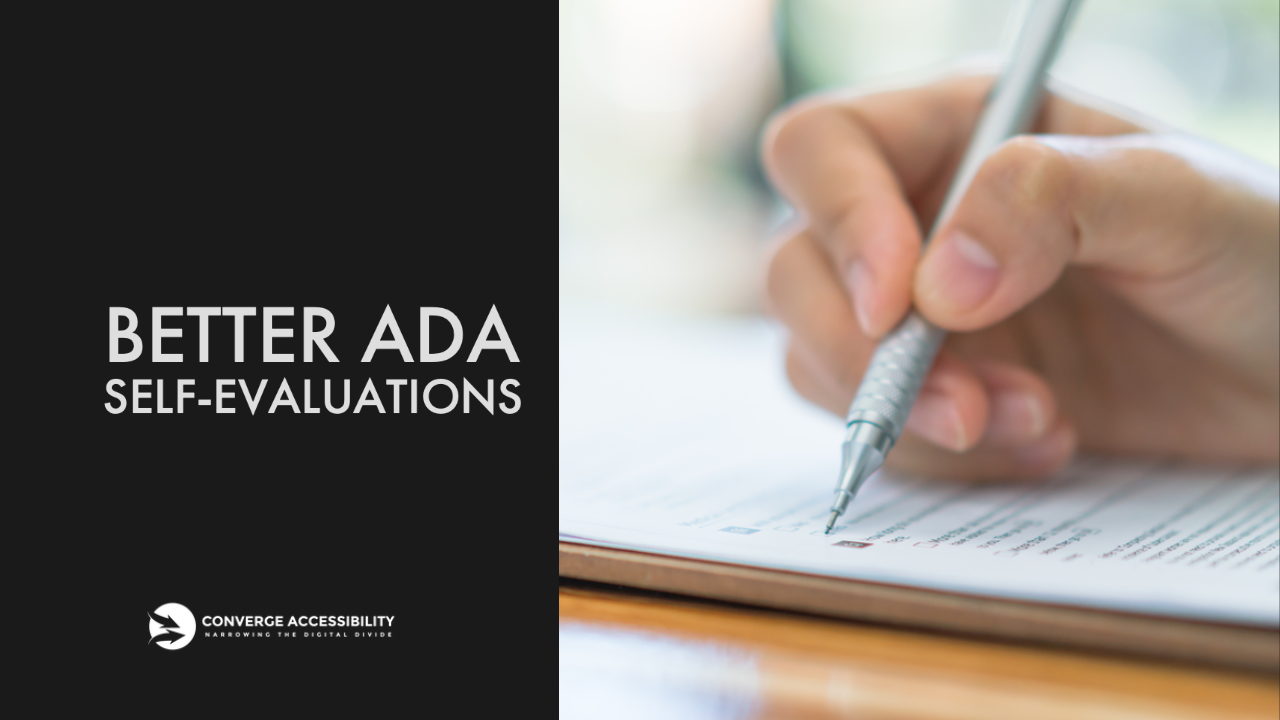 This is Part Two of our Four-Part Blog Series describing how state and local governments (as well as Federal grantees) can conduct better self-evaluations under Title II of the Americans with Disabilities Act and Section 504 of the Rehabilitation Act. We developed our approach from working for over twelve years with organizations like the National Aeronautics and Space Administration (NASA), the California State University (CSU), and King County in Washington state.

Last week, we discussed why Title II of the Americans with Disabilities Act and Section 504 of the Rehabilitation Act require state and local government agencies and federal fund recipients, respectively, to evaluate how their programs impact their customers and users with disabilities. We also introduced the importance of seeking feedback from the local community of people with disabilities early and often in the self-evaluation process because it helps set priorities and uncovers hidden problems.

In this week’s installment, we will talk about another valuable part of our approach to conducting self-evaluations—using a smarter survey strategy. Our approach uses two types of surveys—one for agency leadership and a separate one for agency staff. Our approach gives a quick snapshot of missing or weak policies and training, a library of model policies that agencies can use to create or strengthen.

Too Much Data is Often Worse than Too Little Data

A traditional self-evaluation survey asks hundreds of questions about how agencies meet the needs of users with disabilities. Because the Title II and Section 504 regulations include a number of complicated legal requirements, the length and detail may seem inevitable. But agencies also conduct hundreds or thousands of different programs, services, or activities for the public—and each one may be offered to the public in a slightly different way. This means that a traditional self-evaluation may generate many thousands of different data points. At a certain point, however, a mountain of highly-granular data becomes an obstacle instead of an opportunity because it becomes impossible to identify clear priorities among competing policies or practices. Even if it were possible to identify those priorities, this type of self-evaluation also doesn’t identify what those policies and practices should be.

We created our survey tool from working with a government agency that was used to traditional self-evaluations—and the problems they created. Their Title II Coordinator told us, “while detailed surveys may seem helpful, receiving over 300 spreadsheets of agency programs for our City was not helpful.”

Our approach starts with a high-level survey of agency leadership that simply asks them to compare their existing policies and training with a set of model policies. This survey approach has two benefits. First, instead of asking several hundred questions about specific facets of each policy, our survey asks just 31 general questions and can be completed in 1-2 hours. Second, each model policy serves as a template for creating or augmenting policies and training. In fact, when we presented this model to our client, one Title II Coordinator remarked, “this approach just saved me a year of work!”

Next, we use a 40-question survey that asks questions about the staff’s experience in meeting the needs of people with disabilities. For instance, does the staff have questions about when they can exclude service animals that are unruly? Or have they been unable to effectively communicate with deaf customers who failed to request sign language interpreters before arriving for services? While the high-level survey quickly identifies which policies and training are missing, the staff-level survey of day-to-day experiences helps prioritize which policies and training need to be created first.

A second way to identify gaps in compliance is to conduct short follow-up interviews of staff members based on listening sessions with the local community of people with disabilities. This process validates the concerns raised by the public while also revealing how staff members put abstract principles into practice. For instance, staff members may believe that they are adept at quickly making reasonable modifications of policies to accommodate customers with disabilities. But when they are told that members of the public have voiced concerns about prolonged periods of standing in long lines, they may not understand how prolonged standing affects people with disabilities and why they may need to respond by making reasonable modifications of policies (e.g. providing seating or paging users when it is their turn in line).

A smarter survey gives state and local governments actionable results while being much less burdensome on everyone. If you’d like to see some sample survey questions or learn other simple ideas to make your self-evaluations easier for your organization and more responsive to the real needs of your community, download our white paper using the form below.

Be sure to wait a few minutes after submitting your request as the electrons travel slowly in between our systems. Also, please be sure to check your junk mail folder (but please let us know if it ends up in your junk folder because we try to monitor this).

Get Your Free White Paper Now!