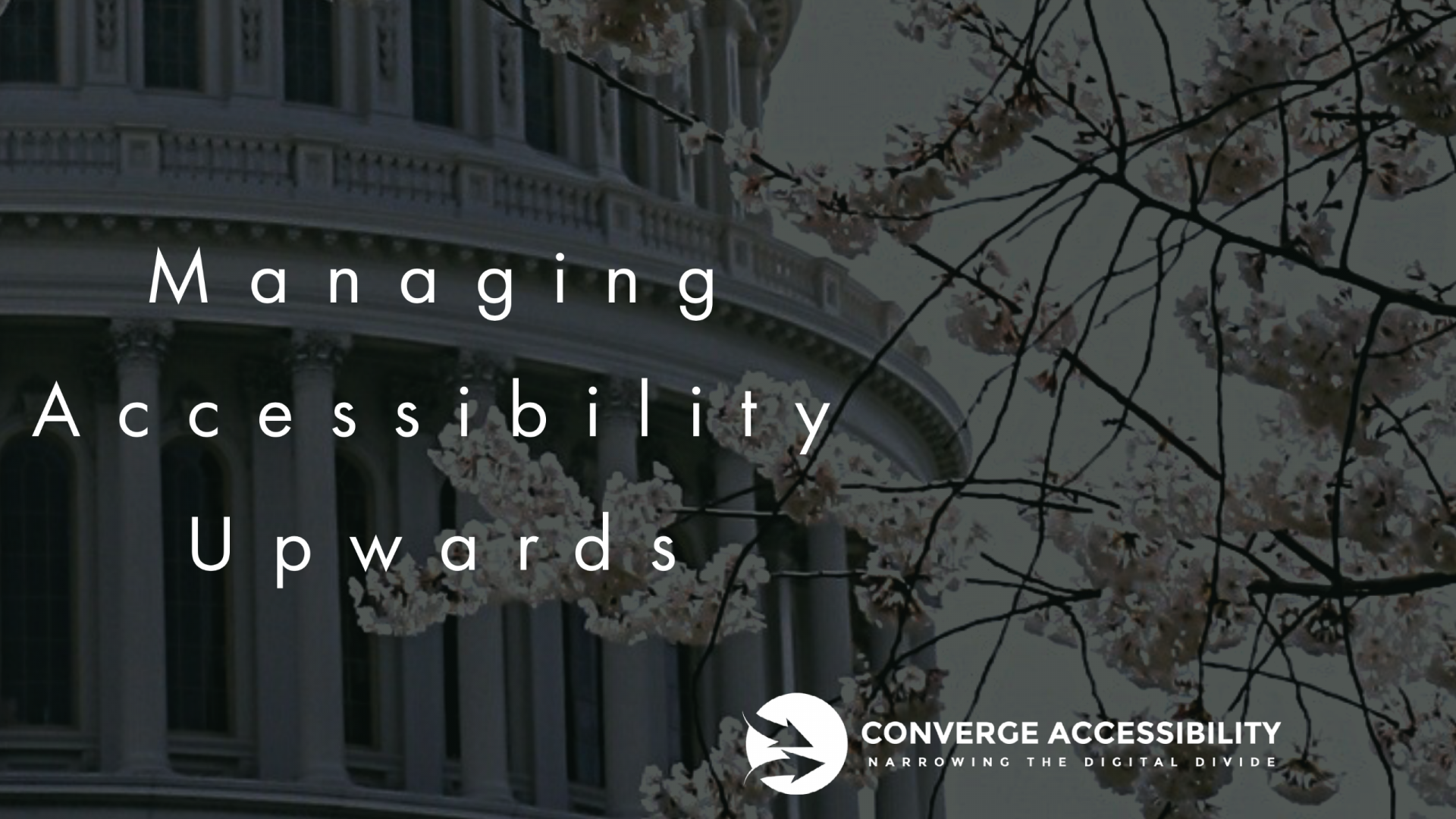 Pushing Public Sector Accessibility from the Bottom Up – Part 1

This is Part 1 in a series describing my recent experiments to promote accessibility in state and local governments—whether they like it or not! 😉 It’s a completely new venture for me and I’ve only started a month ago. If you work in web accessibility as a consultant—or just want to gain a sense of what it’s like to be a web accessibility consultant—join me on this crazy ride.

Before we begin, a warning: this post just sets the background. It's like an appetizer (or more like a tiny amuse-bouche); the next two posts are the entree and dessert. But, you'll likely learn about weird procurement facts that few accessibility professionals know.

Don’t Start a Business Unless You Enjoy Lots of Stress

Shortly after we started Converge Accessibility, Jeff and I joined a entrepreneurial business development group. It’s been utterly invaluable because neither Jeff nor I have ever run a business before. First, our group gave us a basic roadmap of how to start and build a business. As we've learned in the last year, starting a new business is overwhelming. Especially today, there are SOOOOO many skills needed to run a business and, while a lot of them can be outsourced, you still need to have at least a glib understanding of all of them, Even if you try to outsource everything, you'll quickly find that a lot of them just need to be done in-house. Between bookkeeping, business development, marketing, conferences, it constantly feels impossible. Seriously, I have never been as stressed and busy in my life. Oh yeah, and then there’s that COVID thing, which meant that we had to work twice as hard and built our business at half the pace. But this is the nightmare every new business faces.

In any event, our business development group also meets twice a week over Zoom. The people in our group are also all starting new businesses—and none of those businesses have anything to do with web accessibility. The business ventures range from starting a scuba dive shop to dominating the local Etsy handicrafts industry. This is great because they can give us a completely fresh perspective and suggest new avenues. Every Tuesday and Thursday, we all brainstorm about problems we’re facing, share new resources we’ve found, and seek ideas for growing our business. Honestly, I can’t imagine that we would be nearly as successful if we didn’t have this group.

And so it was that a fellow new business owner sent me down a new rabbit hole I never imagined going into—the world of local government procurement. But first a bit of background. Most of our clients come to us from law firms and organizations that find us based on our presentations and digital marketing. In other words, most of our customers already know that they have a problem with their websites and they want us to help them fix it. And I’d say that 90% of our partners and competitors in the web accessibility consulting world find their customers in roughly the same way. But in one of our business group meetings several months, one of the other business owners asked me if we ever tried to flip our approach by proactively going after new web development projects—and offering to help make those projects accessible from the start.

“Oh that’s brilliant!!” I thought and I immediately imagined where I could find such projects. Big private sector projects would be difficult or impossible to find because they’re not publicly disclosed. But big public sector projects are disclosed! In fact, they almost always have to go through a public competition because they are usually quite expensive.

And so it was that I honed my skills in local government procurement systems. To do that, the leader of my business group put me in contact with one of his friends at the local Procurement Technical Assistance Center (PTAC).

“The P-what???...,” you ask? As I quickly learned, the PTAC’s are all part of a federally-funded program in each state to help small businesses gain a foothold in both Federal and local government procurement. This both helps small businesses grow and helps governments choose from a richer variety of products and services. Each state in the United States has a PTAC office— in fact, most states have several PTAC offices. And, while you may imagine that talking with a state PTAC employee about growing your business would be like spending a long afternoon at the local DMV, I can tell you it’s a world apart. Our PTAC contact told us exactly what documents we needed to create—and helped us make them look really spiffy! She also walked us through the different major procurement systems for the City of Seattle, King County, and Washington State—and helped us register for each of them. Signing up for each of these systems uncovered other resources and leads. Before you know it, I was finding announcements for new RFP’s and registering for different procurement systems across the state. This is because, like most states, Washington has entirely different procurement systems and rules for each city and county in the state.

Disorganization and Inaction is a Blessing and a Curse

When I used to live on the east coast, Washington State seemed as far away as the dark side of Pluto. I always knew that it had a progressive reputation that was driven by its biggest city (Seattle). Now that I’ve lived here for over 15 years, I can tell you that that reputation is spot on. But one thing I didn’t know was Seattle’s (and by extension, Washington’s) reputation for being passive-aggressive—and no where does this come through more than in its inaction on bold ideas.

Let me give you a very clear and pertinent example. Washington was really late to the digital accessibility game. While the Federal government passed Section 508 of the Rehabilitation Act in 1998, it took almost 20 years for Washington state to develop a policy that required state agencies to ensure that their web and digital technologies were accessible and conformed with the Web Content Accessibility Guideline (WCAG) 2.1 A/AA. This took the form of CIO Policy 188. Yet, while Washington agencies pay lip service for the need to meet Policy 188, few of them actually do it. At best, it’s listed as a requirement in state Requests of Proposals (RFPs). And that usually means it's completely ignored by vendors. Bold idea but complete inaction.

But Policy 188 only applies to Washington state agencies. Policy 188 has no direct effect on city or county governments in Washington. Title II of the ADA, however, does affect every city and county governments in the country (as well as Washington State)—and, since 2015, the Justice Department has used Title II to require every state and local government it has investigated as part of its Project Civic Access (including the City of Yakima, Washington) to make their websites conform with WCAG 2.1 A/AA. Yet, even then, most cities and counties either ignore accessibility or barely mention it in their RFPs.

So what do local government focus on in their website development RFP’s? Well, Washington agencies at the state, county, and city levels want responsive websites that are engaging and that load quickly. They want to be able to integrate social media channels and be flexible enough to include emerging technologies.

So why do I say that this disorganization and inaction around accessibility is both a blessing and a curse. Well, it’s obviously a bigger curse because it means that the state and local governments in Washington are not accomplishing accessibility as well as they could be. But, it is also a blessing because it’s an open world of possibilities. Seriously, there are several major web development projects up here each month—and each one of them can be fertile ground for introducing new practices and opening new opportunities for accessible public services. And it also doesn’t hurt that each of these contracts is big enough to provide ample room for companies like ours to earn a living in the process.

Am I worried that I’m giving away our business secrets? Not really. Washington state is just one state (and on the dark side of Pluto). There are plenty of other states, plenty of other PTACs, and plenty of other public sector web development projects where talented accessibility consultants can make a positive impact while earning a living.

So now I hope you understand why I'm cautiously excited by this project.

In the next post, I’ll talk a bit more about why so many state and local governments are in this position—and the different ways I’ve tried to attack it from the ground up. And I’ll also give my thoughts on which strategies seem to work and which ones don’t. If you're a web accessibility consultant, you'll want to read this post because it may save you a lot a headaches and give you an exciting way to launch a successful new line of business!

And in my third post, I’ll discuss a very simple and cost-effective strategy that other state and local government have used to get ahead of accessibility, with some real world examples. I'll hopefully be able to give you a sneak peek at an upcoming event that will give you the tools you need to make this happen easily.