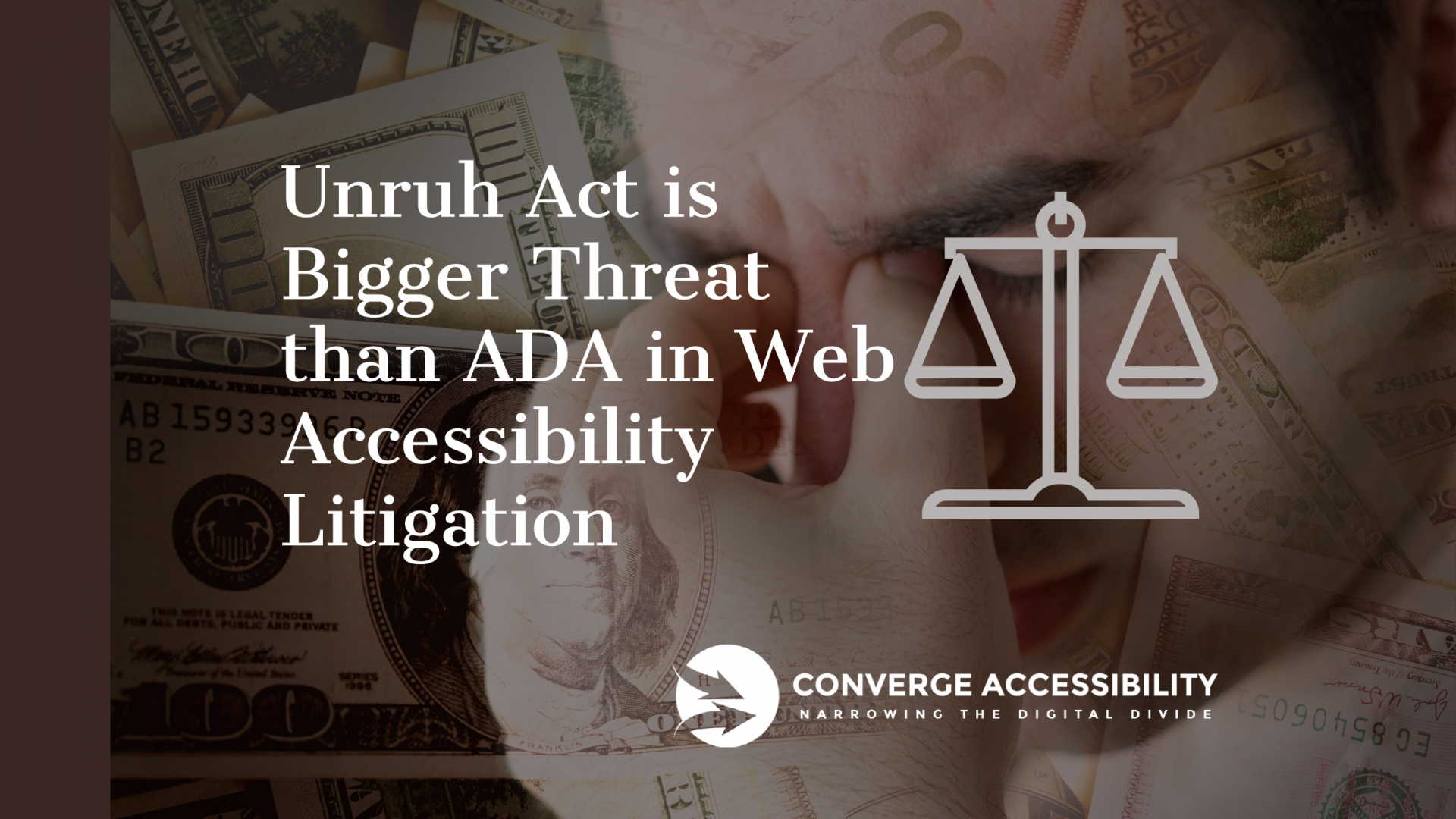 Unruh: It’s Not the ADA that’s the Big Concern in Web Accessibility

Back at the end of August, everything seemed so much more serene on the west coast. Here in Seattle, we were enjoying a brief but beautiful summer-- unaware that in a few weeks we would be enveloped in choking smoke from the fires up and down the west coast. I must have been enjoying the summer a bit too much as I missed the action down in the California and the decision in Thurston v. Fairfield Collectibles of Georgia, 53 Cal. App. 5th 1231, 2020 Cal. App. LEXIS 816 (Cal. App. Dep't Super. Ct. 2020). Thankfully, my friend Jack McElaney at MicroAssist gave me the head's up on a great blog post by Newmeyer Dillion that discussed the Fairfield case.

It's All About Unruh

If you've ever heard any of my legal presentations on web accessibility and the ADA, I've always mentioned that the ADA wasn't the big threat. Instead, it was California's Unruh Act. First, unlike the ADA, Unruh was not limited to "places of public accommodation" and instead covered all business establishments and business activities. Therefore, you don't get into the Byzantine exercise of finding a nexus between a website and a physical place of public accommodation that certain Circuits require. Second, the ADA only permits injunctive relief and attorney's fees, while Unruh provides treble damages or liquidated damages of not less than $4,000 for each offense. The impact of Unruh has been obvious for years; when Target Corporation agreed to pay over $6 million in its settlement with the National Federation of the Blind in 2012, that money wasn't for settling the ADA portion of the lawsuit-- it was almost entirely to pay for the California plaintiffs under Unruh. And, when you consider that each person was entitled to $4,000 when they were not able to buy a bottle of detergent (as an example) from the Target website, $6 million seems like Target may have gotten off lightly.

More immediately, when Congressmen Budd and Correa recently introduced the Online Accessibility Act, I reacted a week ago in my review by noting that limiting ADA web accessibility would have little impact because the greater threat has always been Unruh. Now Thurston v. Fairfield Collectibles makes it clear that that threat is very real.

At its core, Fairfield isn't directly about Unruh. Instead, it's about how far state courts can reach. To understand the case, it helps to start with the facts. Fairfield is the largest retail seller of diecast models in the United States. It sells its models through its catalog and website. It is based in Georgia and neither has an office nor any employees in California. However, a little over 10% of its sales (about $320,000 to $375,000 annually) are to California customers. Cheryl Thurston is blind and lives in California and is a serial plaintiff in web accessibility cases. She has never been a customer of Fairfield and visited the site as a "tester". When she visited the Fairfield site, she encountered several barriers that interfered with her screen reader. Then, she filed a lawsuit under Unruh against Fairfield. The company responded by arguing that the lawsuit should be dismissed because Fairfield did not have a business presence in California. Initially, the trial court agreed with Fairfield and so Ms. Thurston appealed. The appellate court reversed, holding that Fairfield could be sued by Ms. Thurston because personal jurisdiction existed.

Not to oversimplify the law, but lawyers talk generally about two kinds of jurisdiction in these kind of cases. One is "subject matter jurisdiction"-- and the issue here is whether the law covers this type of conduct. I may get annoyed that my neighbor likes to wear plaid shirts with striped pants, but bad fashion isn't prohibited and so I can't sue him over it. Another type of "personal jurisdiction" and the issue here becomes whether a particular court has any authority over a specific defendant. If a defendant resides in the district where the court is located, then it's easy to say that the court has personal jurisdiction. But if the defendant is located far away, it may be unfair to make him defend a lawsuit in California and so the court would not have personal jurisdiction.

At one end of the spectrum are situations where a defendant clearly does business over the Internet. If the defendant enters into contracts with residents of a foreign jurisdiction that involve the knowing and repeated transmission of computer files over the Internet, personal jurisdiction is proper. At the opposite end are situations where a defendant has simply posted information on an Internet Web site which is accessible to users in foreign jurisdictions. A passive Web site that does little more than make information available to those who are interested in it is not grounds for the exercise [of] personal jurisdiction. The middle ground is occupied by interactive Web sites where a user can exchange information with the host computer. In these cases, the exercise of jurisdiction is determined by examining the level of interactivity and commercial nature of the exchange of information that occurs on the Web site.

In theory, this means that any eCommerce site can potentially be sued in California-- and even this blog potentially could because it falls in the "middle ground" of interactive sites. But the Fairfield court was reluctant to go the extremes of personal jurisdiction permitted by the Snowney decision.

But even assuming As You Sow was erroneous in predicatingjurisdiction on less than one percent of sales, here Fairfield made eight percent of its sales to residents of California. These sales totaled some $320,000 to $375,000 a year. That is the equivalent of having a brick-and-mortar store in California—a “virtual store... Given that volume of transactions, Fairfield was on notice that it could be sued in California...The benefit of making substantial sales to California consumers comes at the cost of potentially being sued in California. If Fairfield finds that too burdensome, it can simply choose not to sell to Californians and to post a notice to that effect on its website.

Fairfield also argued that that it would be disastrous for businesses to have to comply with the laws of not just California but also the other 50 states in which it does business. Here the court fudged and brushed aside Fairfield's argument by noting that its opinions had nothing to do with the question of whether Unruh could be applied to Fairfield-- instead, the court's opinion addressed only whether a California court had personal jurisdiction over a defendant. Whether Unruh applied to out-of-state websites-- and whether it would be fair and Constitutional to apply Unruh to those websites-- was not decided in this case.

There is a judicial doctrine that encourages courts to decide cases on the narrowest grounds possible. In theory, this prevents judicial opinions from straying further than necessary and having unforeseen consequences that were not considered by the court. But it can also make opinions frustrating because it leaves open significant questions. In this case, the Fairfield court is reminding us that this case really has nothing to do with Unruh at all-- it is simply a matter of whether a California court has authority over a Georgia company that does ten percent of its sales in California through the internet. Left open is the question of whether Unruh was ever intended to cover out-of-state activity that affects its residents.

While the Fairfield opinion didn't address this latter issue, I have to believe that the courts would have little trouble extending Unruh to out-of-state companies. While I'm no expert in California state law (I'm not admitted to practice there), I do know that Unruh is an omnibus civil rights laws that includes protection based on gender, race, and disability-- and something tells me that these are sufficiently important issues that a California court would have no trouble saying should be extended to cover conduct outside California (including running a website) that impacts Californians. But we will have to wait until another day for that decision.

0 comments on “Unruh: It’s Not the ADA that’s the Big Concern in Web Accessibility”